MARCO ISLAND, Fla., July 12, 2022 Marco Island, located on Southwest Florida’s Gulf Coast, is one of the Sunshine State’s most beautiful and desirable tourist destinations. But it is so much more. For hundreds of years, it has held in its earth some of the mysteries of the Island’s ancient peoples — the Calusa and their ancestors.

In 1896, Marco Island revealed one of the most important finds in the history of American archaeology. Smithsonian anthropologist Frank Hamilton Cushing discovered the now world-famous Key Marco Cat and other 500-to-1,500-year-old artifacts on Key Marco during the famed Pepper-Hearst archaeological expedition.

These artifacts of wood and plant fiber were astonishingly well preserved because they were buried in an oxygen free muck. Some were painted and their original colors were still intact.

Many began disintegrating upon exposure to the air. They would have been lost forever if not for expedition artist and photographer Wells Sawyer who captured them in watercolors and photos as they were brought out of the ground.

Now, for the first time since their discovery, the Key Marco Cat and other rare pre-Columbian Native American artifacts discovered with it are reunited at the Marco Island Historical Museum (MIHM). In addition, a number of Sawyer’s original watercolors of the artifacts will be exhibited starting in October.

The Key Marco Cat, on loan to the MIHM from the Smithsonian Institution’s National Museum of Natural History, is on exhibit at MIHM now through 2026. 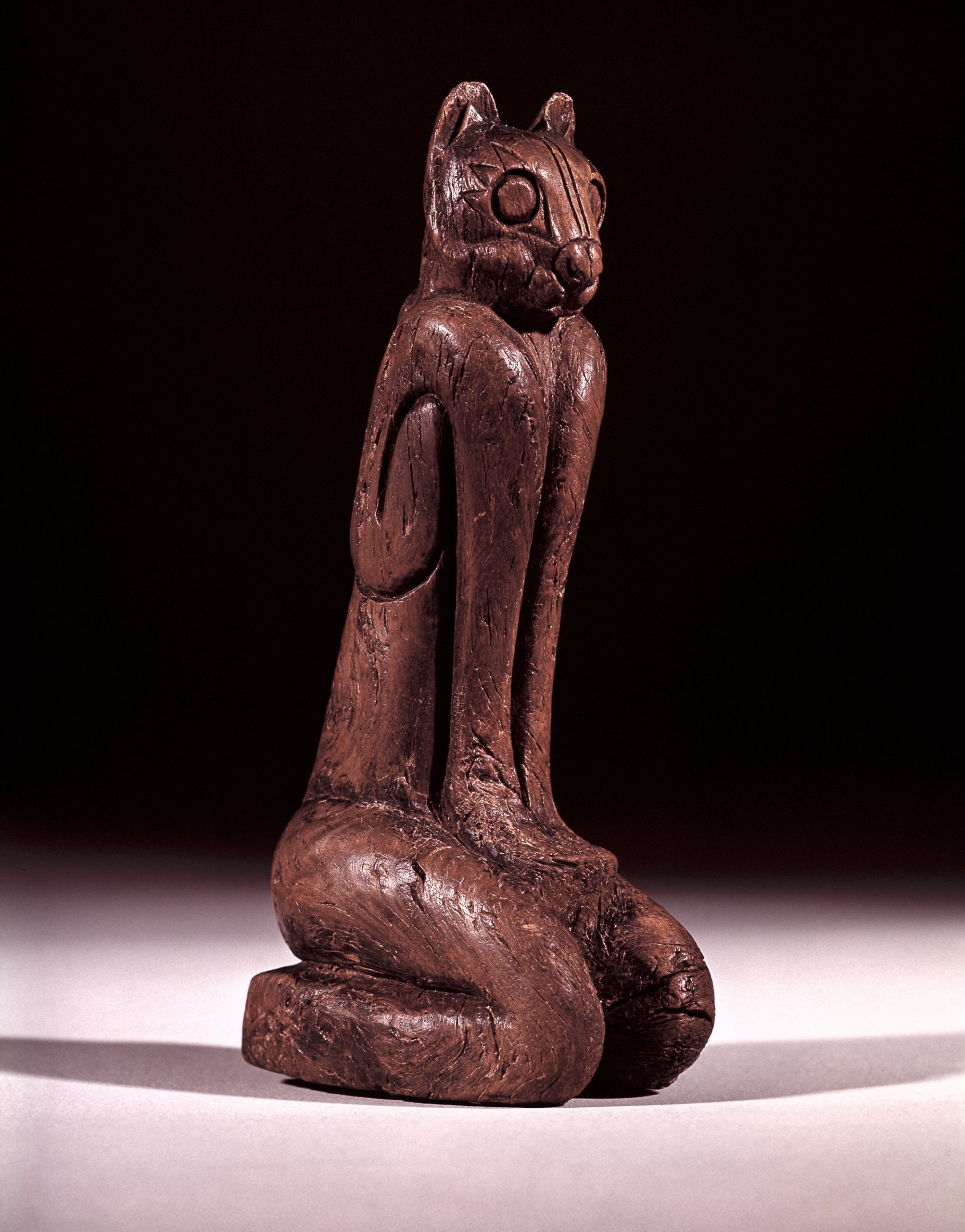 The Key Marco Cat — one of the finest pieces of pre-Columbian Native American art ever discovered in North America — is on exhibit at the Marco Island Historical Museum through 2026. Photo credit: Courtesy of Department of Anthropology, Smithsonian Institution (A240915)

Sixteen additional Key Marco artifacts, on loan from the University of Pennsylvania Museum of Archaeology and Anthropology (Penn Museum), are on exhibit at the MIHM now through April 2024.

In Art of the Dig: Wells Sawyer’s Watercolors, six original Wells Sawyer watercolors are on loan from the Florida Museum of Natural History in Gainesville. In addition, 25 reproductions of Sawyer’s works from the Smithsonian Institution’s National Anthropological Archives and the Penn Museum will be part of the exhibit from October 13, 2022 through January 19, 2023.

The Key Marco Cat, a half cat/half human figure, is considered one of the finest pieces of pre-Columbian Native American art ever discovered in North America. At just six inches tall, the enigmatic feline has captured the public’s imagination for over a century and continues to intrigue all who view it.

The Key Marco artifacts are showcased in the MIHM’s award-winning permanent exhibit Paradise Found: 6,000 Years of People on Marco Island. This exhibit features a life-size Calusa village and more than 300 pre-Columbian Native American artifacts from Marco Island. Original artwork depicts the lives and ceremonies of the Calusa and the 1896 archaeological dig. A Calusa-inspired soundtrack by Emmy and Peabody Award-winning composer Kat Epple enhances the immersive visitor experience.

“The Key Marco Cat from the Smithsonian collections is an extraordinary object that attests to the unique archaeological record of Key Marco and the people and cultures who lived there for millennia,” notes Torben Rick, Chairman of the Department of Anthropology at the Smithsonian Institution’s National Museum of Natural History.

“The Key Marco Artifacts exhibit is the culmination of a 25-year vision on the part of the Marco Island Historical Society to bring these incredibly important artifacts back to Marco Island in order to educate and inspire people of all ages about the fascinating history of our region,” says MIHS Curator of Collections Austin Bell. “It has taken years of planning and discussions with the lending institutions and the support of a public-private partnership that includes the Marco Island Historical Society, Collier County and the community.”

The Key Marco Artifacts exhibit is supported in part by the Collier County Tourist Development Council. For information on Collier County, visit www.paradisecoast.com.

Congratulations to the people of Portugal on their National Day
La Sagrada Familia
Spain experiencing a heat wave
Neuschwanstein Castle, Füssen, Germany
2021 Summer Holidays Still On Across Europe, But Will Look Different For Many
Puerto Rico Highlights Eight Under-Discovered Wonders For Travelers To Explore
Royal Caribbean Thanks Emergency Services, NHS And Armed Forces With UK Homecoming, Set For This Summer
Ad Deir, in the ancient Jordanian city of Petra
The Best of Provence Chateau de Berne and Ultimate Provence Celebrate International Rosé Day and the Estates Reopening
Norwegian Cruise Line CEO: Cruise ships will be the ‘safest place on earth’ when they relaunch

The rapid rise of ‘red tourism’ in China
Another Grim Year For Global Tourism
Singapore accounts for one-third of global cruise travelers
Eurofins opens Europe-wide COVID-19 testing centre network to facilitate summer travel
June U.S. Travel Agency Air Ticket Sales Pass $4 Billion
Now open: France, Spain and more get ready for international tourists
Supersonic flights are set to return – here’s how they can succeed where Concorde failed
Celebrity Cruises Begins Caribbean Comeback With First Sailing From St. Maarten
A delegation of tourism industry players from Rwanda is participating at the World Travel Market in London
Few industries in South Africa have suffered as much as tourism
Why do young people prefer to travel abroad?
Inmarsat: Air Passengers’ Confidence Eight Times Higher Than a Year Ago, 83% Worldwide Now Happy to Fly
Cruise Ship Queen Victoria embarking in Stockholm
Visit Israel in 2022: Rising Tourism Numbers, New Hotel Openings, Refurbishments and More
Catania attracts tourists as temperatures rise
YELLOWSTONE NATIONAL PARK’S WONDER EXTENDS BEYOND ITS BORDERS
Adventures by Disney to Debut Its First-Ever Adriatic Sea Expedition Cruise in 2024
Small Cruise Ship M/V Clio Arrives to Haifa
2022 Top 25 Historic Hotels of America Most Magnificent Art Collections
Diamond Princess Sets Sail With a Season of Mexico and Hawaii Sailings From San Diego
We use cookies on our website to give you the most relevant experience by remembering your preferences and repeat visits. By clicking “Accept”, you consent to the use of ALL the cookies.
Do not sell my personal information.
Cookie SettingsAccept
Manage consent

This website uses cookies to improve your experience while you navigate through the website. Out of these, the cookies that are categorized as necessary are stored on your browser as they are essential for the working of basic functionalities of the website. We also use third-party cookies that help us analyze and understand how you use this website. These cookies will be stored in your browser only with your consent. You also have the option to opt-out of these cookies. But opting out of some of these cookies may affect your browsing experience.
Necessary Always Enabled
Necessary cookies are absolutely essential for the website to function properly. These cookies ensure basic functionalities and security features of the website, anonymously.
Functional
Functional cookies help to perform certain functionalities like sharing the content of the website on social media platforms, collect feedbacks, and other third-party features.
Performance
Performance cookies are used to understand and analyze the key performance indexes of the website which helps in delivering a better user experience for the visitors.
Analytics
Analytical cookies are used to understand how visitors interact with the website. These cookies help provide information on metrics the number of visitors, bounce rate, traffic source, etc.
Advertisement
Advertisement cookies are used to provide visitors with relevant ads and marketing campaigns. These cookies track visitors across websites and collect information to provide customized ads.
Others
Other uncategorized cookies are those that are being analyzed and have not been classified into a category as yet.
SAVE & ACCEPT